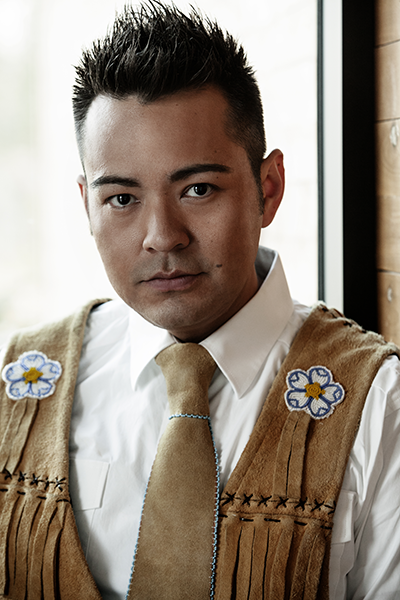 From a long line of fine Gwitch’in fiddlers, Boyd Benjamin was destined to take up the traditions of his home community of Old Crow, Yukon. With an ideal balance of natural talent and formal training, Benjamin’s repertoire features a staggering gamut of songs, styles, and techniques.

“My grandfather – Peter Benjamin was a fiddler. Fiddling is in my Blood already, I see myself continuing to pass it on”.

Fresh from Canada’s Northern Scene festival in Ottawa, fiddle virtuoso Boyd Benjamin is flying pretty high in the media lately, with his recent acclaimed Debut Album CD Release only adding to his already impressive reputation as one of the North’s most promising musical talents. Boyd’s musical history includes studies in the Yukon, Alberta and B.C. By grade 6, he was playing guitar and singing in local coffee shops around B.C. Music educators recognized his natural talent and led him to learn trombone, oboe and tuba along with music theory and violin. He credits this formal training and his heritage for imprinting in him the capacity for creating music that captivates his listeners.

Boyd’s performance history includes performances in Alaska, Yukon, NWT, B.C., and Ontario. He has played at many festivals and in many towns across the nation with Juno nominated singer/songwriter and fellow Yukoner Kevin Barr and with band Home Sweet Home, who released an album in May 2011. His performing highlights include performing with musicians Buffy Sainte-Marie, Ashley MacIsaac, Fred Penner, Tom Jackson and performing at the Vancouver 2010 Olympics. Boyd’s captivating and energetic stage presence is infused with charm and grace that forges instant fondness. His lively tunes lift spirits. Of course, the multi-talented young gent can also lift planes and helicopters – he has licenses for both (in addition to his obvious license to musically thrill) and pilots for Alkan Air of Whitehorse, Yukon.

His dream of a life with music as well as an aviation career spurred Boyd Benjamin on to become both a performer and a pilot, achieving a Special Youth Award at the 2008 National Aboriginal Achievement Awards for the goals he has reached to date and his vision for the future.

×
Update Required To play the media you will need to either update your browser to a recent version or update your Flash plugin.

×
Update Required To play the media you will need to either update your browser to a recent version or update your Flash plugin.